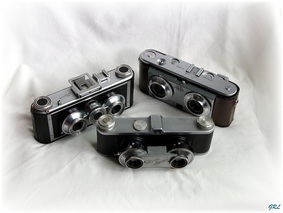 Iloca Stereo Cameras
The Iloca company was one of the more prominent  manufacturers of stereo cameras during the 1950's.

Here is a list of the most common stereo cameras produced by the company:
The company also produced a range of Iloca single lens cameras.

The earlier European (7p) format cameras were based directly on the Iloca I single lens equivalent, complete with bottom film loading arrangement.   This can be a tricky procedure to ensure that the  film is correctly located on the film sprockets.   Later models had removable camera backs which simplified the loading process considerably.  Early models seem to have gained a reputation for being somewhat problematic, no doubt due to the film loading and film transport mechanism  - whether such a reputation is deserved or not is open to debate.  However, in my experience, the Realist (5p) format cameras from the Iloca Stereo II onwards seem to be quite robust and reliable .

In addition to the list above, there were many variants produced under different brand names such as Realist (the David White Company), Tower (Sears, Roebuck and Co.), and Photrix (Montgomery Ward).

Stereo photography can be fun, and it offers a unique viewing experience, even when using technology from the 1950's.  It is remarkable when you consider that this type of equipment was readily available around 60 years ago (in fact dedicated stereo cameras and viewers have existed for around a century and a half), given that 3D photography has only recently started to make a resurgence in today's marketplace with the latest digital technology.
Powered by