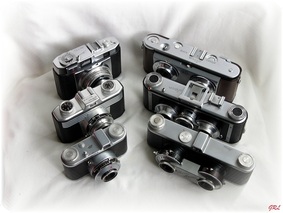 Iloca both stereo and non-stereo cameras
​The Iloca company produced both single lens cameras (non-stereo or 2D) as well as stereo cameras (3D) during the production period between 1948 and 1960.

Here is a list of the most common cameras produced by the company:

Single Lens Models
Stereo Models
In addtion to this list, there are many variants that were manufactured under different brand names such as Realist, Graflex, Tower, Argus, Photrix and MPP/Iloca.

A few words about old cameras...

Iloca cameras are now at least sixty years old, and many of them would have spent the last 40 years or so in storage.  Unless they have been recently serviced, expect them to be sluggish in operation (especially at the slower shutter speeds), if in fact they work at all.  It is feasible for a camera that is complete and free from damage to be serviced,  However, if a camera has significant issues, then it's a different matter. The challenge these days is finding someone who will take on the task of maintenance and repairs, and at a cost that is affordable.  Also, the demise of film and film services makes film photography a different proposition these days.

That said, It still can be an enjoyable and satisfying experience to produce good results with one of these old cameras from time to time.
Powered by